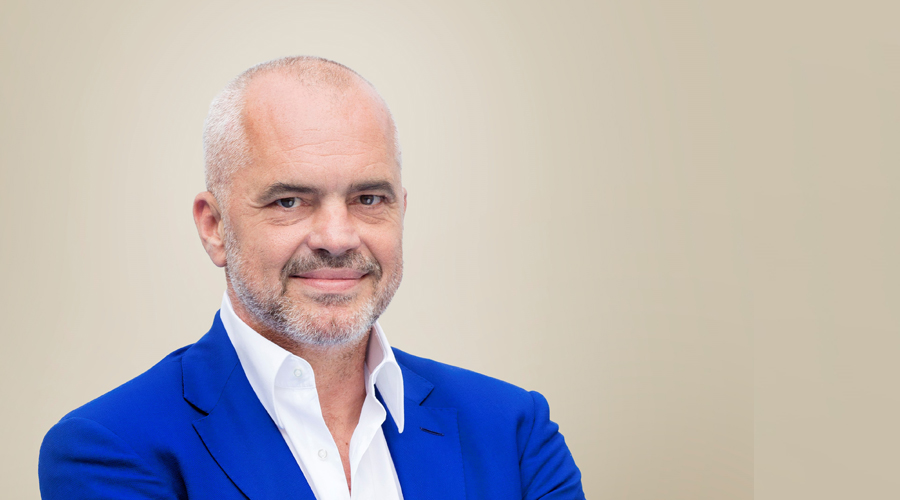 Edi Rama has been Albania’s prime minister since 2013.  The Chairman of the Socialist Party of Albania and former mayor of Tirana, Rama stands out for the fact that he is also a legitimate artist. Between overseeing historic reforms, award-winning urban development and preparing for Albania to begin negotiations over EU accession, he also designed the wallpaper in his office, holds art exhibitions and often doodles colorful, tightly tied-together images in his agenda. A colorful figure himself, here he describes the beauty and strangeness of Albania’s journey towards securing EU accession talks and why Angela Merkel has become the country’s main champion

Negotiations for Albania’s accession into the EU could begin as early as June. What are your expectations around that?

Last year, the EU Commission recommended starting talks with Albania in 2018. That didn’t happen. The EU did, however, commit to starting talks in 2019. Jean-Claude Juncker, president of the European Commission, said back in 2014 that expansion could be frozen for five years, and now it’s 2019. Macedonia’s deal with Greece represents a milestone in diplomacy in the region and, in a way, it has revolutionized the way it integrates Albanians into the country. There appears to be momentum. At the same time, you cannot predict anything anymore about what the EU might do next. It’s a family issue and predictability is the last thing we can ask for. What is important is that we have done our homework, and since last year we have been considered by the European Commission as ready to start the negotiations. The commission, in my view, is the only body that has the expertise and the full insights into the story of a country. This being said, the rest is just politics and you never know. But, at the end of the day, what’s important is that we don’t do it for others; we are doing it for ourselves and for our children because the integration process is a fantastic tool for modernization. Incorporating EU standards is really doing exactly what the next generations deserve.

I’m sure that if the people that built the EU were still around, they would have understood much better the benefits of us joining. For us, the EU is what it was for them – a project of peace and a definite space where you are not threatened by the conflicts of the past

Are you feeling less optimistic about the whole process?

No, I have always been tragically optimistic. My life and our history are simply showing me that tragic optimism is the best. Now, even the Dutch, who were skeptical, have said we’ve made major steps. The Netherlands, along with Germany and Austria, have also been very helpful. The three countries are part of a coalition that is assisting us in our justice reforms. We have done something that no one else has done. We have changed the constitution – but not only this; we have passed all the judges and prosecutors through a very tough vetting process and we are cleaning up a system in a way that other countries already negotiating haven’t. This is the beauty and the strangeness of this process because we are supposed to open negotiations and we’ve done things that the other countries that have already negotiated still have to do.

Are you suggesting that it’s been an asymmetrical process?

Of course. It is not a secret and everybody knows it. For countries that joined first, the pressure was less, the demands were less and the process was softer. And then for every country joining after, it has been harder.

Do you think there is less appetite for new countries joining the union?

I must be clear that we don’t intend to enter the EU right now – we want open negotiations. The time to enter the European Union will come later. It’s talking about marriage, not getting married. This makes it quite frustrating and even absurd because we’ve done everything to open negotiations, and it’s being treated like they’re deciding now whether or not we are entering the EU. It’s simply not true. 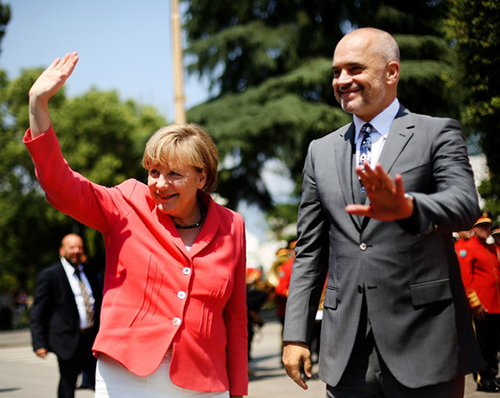 Merkel is our champion, with a clear vision for Balkans

How could the EU and Germany benefit from beginning these talks?

I’m not going to tell them anything. They are in a position to think what they want. They are stronger; they haven’t seen war in their lifetime. So for them, it’s not so easy to understand the reasons why we are so strongly passionate about the EU. I’m sure that if the people that built the EU were still around, they would have understood the benefits much better. For us, the EU is what it was for them – a project of peace and the place where you can find a definite space where you are not threatened by the conflicts of the past. For the people in Europe today, war is just some black-and-white television fiction. On the other hand, of course, the EU has its own problems. It’s quite a complex time, and it’s not easy to make predictions.

Do you think there is a misconception about Albania in Europe?

I would say that it has been worse. It’s become better, and it will go on getting better and better because more people keep coming to Albania and realizing that the country is totally different than negative generalizations may have led them to believe. That idea will spread. But at the same time, lazy journalism is characteristic of our time. From lazy journalism, you can’t expect good news; you should expect bad news because it sells more.

Last year the Albanian economy grew by 4.1 percent, according to the EU. How would you describe the macroeconomic situation of the country?

In our last estimate at the end of 2018, growth was at 4.5 percent, but that number is still being evaluated. We want to maintain growth above four percent. We have also had a very significant decrease in unemployment, from 18.7 to 12.3 percent. Our aim is to go towards eight percent. It won’t be easy, but it’s possible. This is what we fight for.

Chancellor Angela Merkel is one-of-a-kind, and she has a very clear vision about the Balkans – about the past and about the future of this region. That’s why she has been our champion and still remains our champion

How would you characterize Albania’s bilateral relationship with Germany?

Very good. Germany is Germany. Chancellor Angela Merkel is one-of-a-kind, and she has a very clear vision about the Balkans – about the past and about the future of this region. That’s why she has been our champion and still remains our champion. Her leadership has made Germany the savior of Europe. I don’t know where Europe would be today if Angela Merkel hadn’t been around during the refugee crisis. Although she had to pay a high price for that, her willingness to pay that price makes her a great leader. Germany is very fair and very just in general, which is not the case for every country.

It was reported that Germany just gave Albania a historic grant. Could you tell me more about the importance of that?

It’s not a grant – the media made it look like that – but it’s financing. Within the view of bilateral cooperation, it is a several-year plan of financing through the KfW development bank.

There is a lot of potential to grow our bilateral trade, and I’m very confident that’s exactly what will happen, especially when it comes to our agricultural products.

According to figures from the Heritage Foundation, one-tenth of all FDI that comes to the Western Balkans comes to Albania. What opportunities are there to attract more?

It’s one-tenth because we haven’t been able to create a stable path to increase FDI in tourism, where there is the biggest potential. FDI in tourism has been very low and instead energy has been more important. We are now coming to the end of the final tests with Shell in terms of a new offshore oil and gas field. Every indication is that this will be a success story. We should know this spring. If the news is positive, we’ll have an additional one euros of investment coming in per year over the course of several years. Now, we are also starting to invest in solar. Our first offer went very well and now we are preparing a second. Manufacturing and agriculture also offer quite interesting opportunities for foreign investors.

We want to maintain GDP growth above four percent

What has your government done over the past year in terms of infrastructure and opening corridors to the rest of Europe?

There is still a lot of work to be done, but there are some major projects underway. I hope that there will be some more coming from the Berlin Process in that regard.

Rather uniquely among politicians, you are an artist. What are you doing as prime minister to support the cultural sphere?

Fortunately, we have a lot of talent and people who are already expressing themselves abroad. For example, there are Albanians in the orchestra of the Berlin Philharmonic, we have fantastic opera singers, and we have great visual artists. For a country of our size, we have a lot of clout in the art world. The recent renovation of Tirana’s central Skanderbeg Square won the prestigious 2018 European Prize for Urban Public Space, which is one of the highest prizes in architecture.

Related Interviews
Prime Minister of Albania
This site uses cookies for analytics, personalized content and ads. By continuing to browse this site, you agree to this use.OKREAD MORE